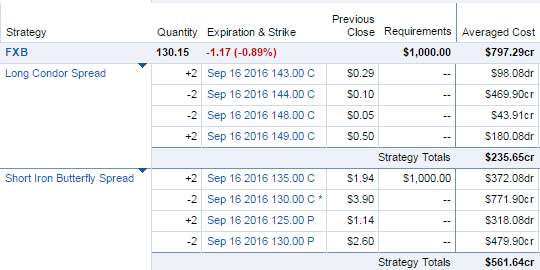 We have been running long SPY butterflies for the last 6 months, and on average have lost a small amount of money so far. Mostly because of a continuously rising market for the last 5 months with little downside volatility. THe advantage of a long butterfly placed for a small debit is that typically only that small debit is lost if we are “wrong” on direction.

This month we figured if you can’t beat em join em., and will try some short put butterfly to bring in some premium. Trade Entry right at the close on Fri May 3rd:

This is a much safer way to sell premium than a traditional put credit spread. The options tend to move all together in the first few days of the trade, showing little p&l for the overall position. However after about 10 to 30 days in a butterfly position the “tail” (lowest option leg) of the butterfly should start to decay faster than the “head” and the “wings” together (the top three option legs). The “head” and “wings” option legs typically follow each other relatively closely until about 10 days out from expiration. With about 10 days to go to expiration, the direction of the underlying starts to make a much bigger difference to the overall position p&l.

Note: if the market crashes more than about 10% this position will still actually make a small profit. So want the position to go up or remain flat, or crash very hard and very quickly. A slow drift downwards would likely be bad for position over next 45 days to expiration.

This short put butterfly is also a long volatility position – that should make money if volatility picks up, so it is good for this very low volatility environment. Long butterflies (the opposite trade to this one) are great trades when volatility is higher, but they don’t always make sense when vol is this low (unless you are using them to hedge a stock position).