The American dream is supposed to be if you work hard, make a few sacrifices, then you’ll ultimately be a millionaire or financially comfortable at least. But why do some people feel like they can’t get ahead ?

Historically in our parents generation there was more job security and results were more linear – e.g. work for 30 years, save a similar amount each year, bit in the bank, bit in stocks (biggest bull market in history) and away you go into the sunset.

The standard middle class track has arguably been suffering since year 2000, and there is this overriding sense that somehow the average person is getting short changed or it’s harder for them to get ahead. In that period there has been market volatility, with the dot com crash (2000), the largest recession in living memory (2009), then one of the longer bull markets in history (6 years from 2009 to 2015(?)). People have felt more financial volatility in the last decade than their parents were used to, although historically this type of greater market volatility is more “normal” market behaviour.

People have several ways to live life financially, and these are often based on modelled behaviour typically from their parents or mentors along the way.
The following picture shows a few different trajectories for people’s shot at freedom: 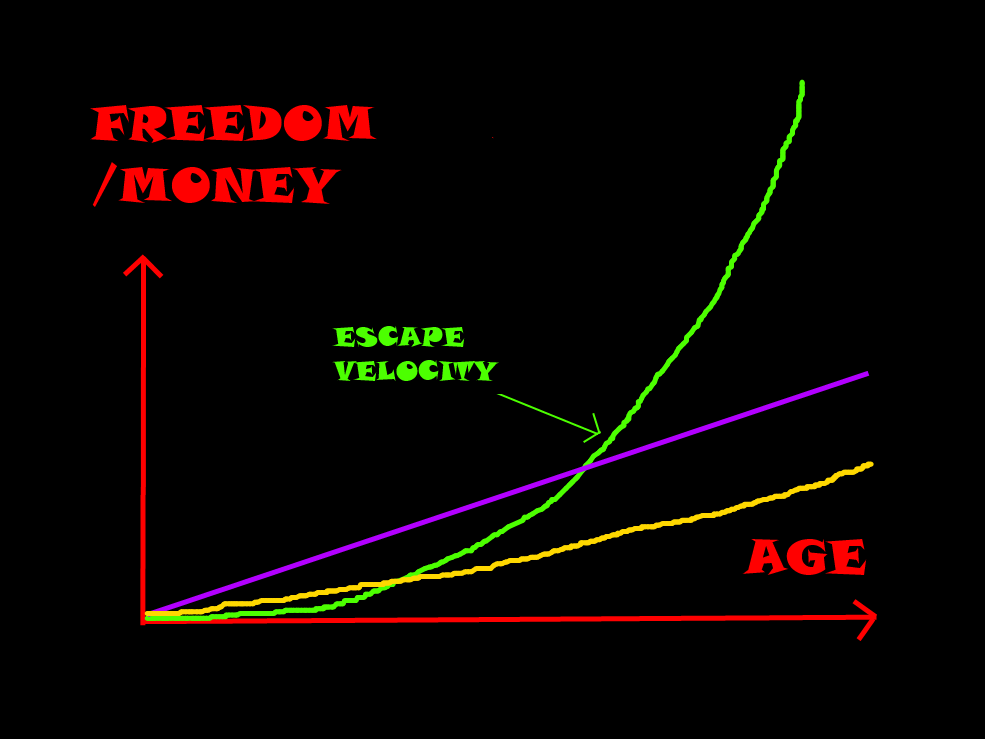 Purple line = many people’s perception of the american dream, that they think their financial progress should be relatively steady and linear. Potentially was their experience from watching people in their parents generation, “slow and steady wins the race”.

Yellow line = new reality of working and getting ahead, harder and harder with less rewards for more effort. Not sure why cant keep up with standard of living.

Green line = either an excellently paid professional OR an entrepreneur type starting a new business. Potentially (significantly) lower rewards in the early years, but hopefully with the curve increasing where the business starts operating under its own steam, eventually leading to “escape velocity” where the rewards for the effort are outstanding and non-linear and important owner self sustaining. The business owner doesnt not now have to invest as much time or money to run business, hence increased freedom as well as money. Curve can be much steeper if success comes faster.

So why this negative perception on “getting ahead” today ?
People perceive that they have to work harder and for less relative pay, which helps explain why today people think it is hard to get ahead, even if they have a very good job.
This is because the relative rewards are not there, which is mostly due to :
– Declining wage growth when compared to inflation, sometimes due to outsourcing, but sometimes due to processes getting more efficient or just being automated more effectively.
– Job commoditisation, especially for people who just slot into a role in a large corporation. There isn’t the incentive for the corporation to raise your pay significantly every year
– Less job security, careers can change or disappear with economic conditions, and less likely that people will do the same job for life.

This following table briefly compares different levels of jobs between our parents generation and today:

We’d argue that today for the career categories from “poor” up to “very good”, on average people are receiving the rewards one level below what their parents generation got. However the big change is in the excellent category where the rewards are potentially expodentially better than their parents generation. However to these outstanding rewards require thinking outside of the standard career process. Arguably this is why people think they are suffering on their chosen career path IF they are looking for it to provide them with financial freedom; they are trying to make the current standard career with a company do what it cant do, make you wealthy.

That said, if you have an excellent job or start a business you can do potentially do very well, and become wealthy in a non linear way. Indeed for certain people like sports stars, CEOs and successful business startup owners, the rewards have never been greater. But they are for fewer and fewer people, because they typically require a level of excellence or hard work (and maybe luck) to achieve them. That is not to judge or call for wealth distribution, just recognise that you are not playing a linear game. Therefore on the lower rungs of the career ladder with a standard approach its hard to get ahead and seems “not fair”.

If you have an very good or excellent job (e.g. doctor, financial computer programmer, lawyer etc) but you probably are doing pretty well, but have a limit on how much you could make. But that might be more than enough for you, so although people say “you’ll never become wealthy working for someone else”, that is not necessarily true for everyone. However this time of jobs typically require great time and energy commitment, but because the rewards are there they are worthwhile – arguably still a “wage slave” but better to be a well paid one 🙂

How about doing both the day job and be an entrepreneur ?
Sometimes people split these career approaches into labels like “middle class” (standard track) or “runs own business” (entrepreneur track), but you are allowed to do pick and choose aspects from either approch that work for you – just try and fit it what you can around your current job.

For example, although we don’t like to admit it, many people’s personalities (including mine) can not deal with the constant (initial) failure associated with entrepreneur and keeping motivated when things go badly. If you know you don’t handle that well, the hybrid track standard/entrepreneur might be a good approach for some. Basically keep the day job as an income stream, but recognise that it will not make you rich on its own, but it is necessary to keep the lights on with a minimum of stress. Then take on side projects with ideas you care about. This can be good hybrid of the stability of the standard track, with the upside potential of the entrepreneur track. Plus you will always learn lots of stuff if you try to start your own venture or business.

In many ways there has never been more opportunity to take this “hybrid” track to learn or start a business part time. There is a massive amount of knowledge available online and even properly organised education classes (e.g. Khan academy). The tools are amazing and you can learn so much stuff for FREE just by researching without ever leaving the house! If you dedicated 5 hours a week to studying anything instead of watching Netflix that would be about 250 hours a year (or 6 weeks of study). The key that you have to want it, you have to want to do, be motivated, which includes working when you don’t want to. That’s not to say don’t make it just a task, but you have to overcome the initial urge to do not want to do it. It is useful not to push yourself beyond your breaking point of interest, because then sometimes you don’t come back to the work for several days, and you lose momentum.

So what ?
Basically recognise that a career and financial freedom is not linear. Also its ok to try the entrepreneur approach at the same time as the day job. If you are not interested in that then its fine to carry on – just don’t expect something from your career today that it might not be able to provide in the long run. If you are interested in trying new stuff, good luck to you and even if it does not work out you will learn a ton of stuff about yourself and how to run a business.

2 thoughts on “Paths to Financial Freedom”