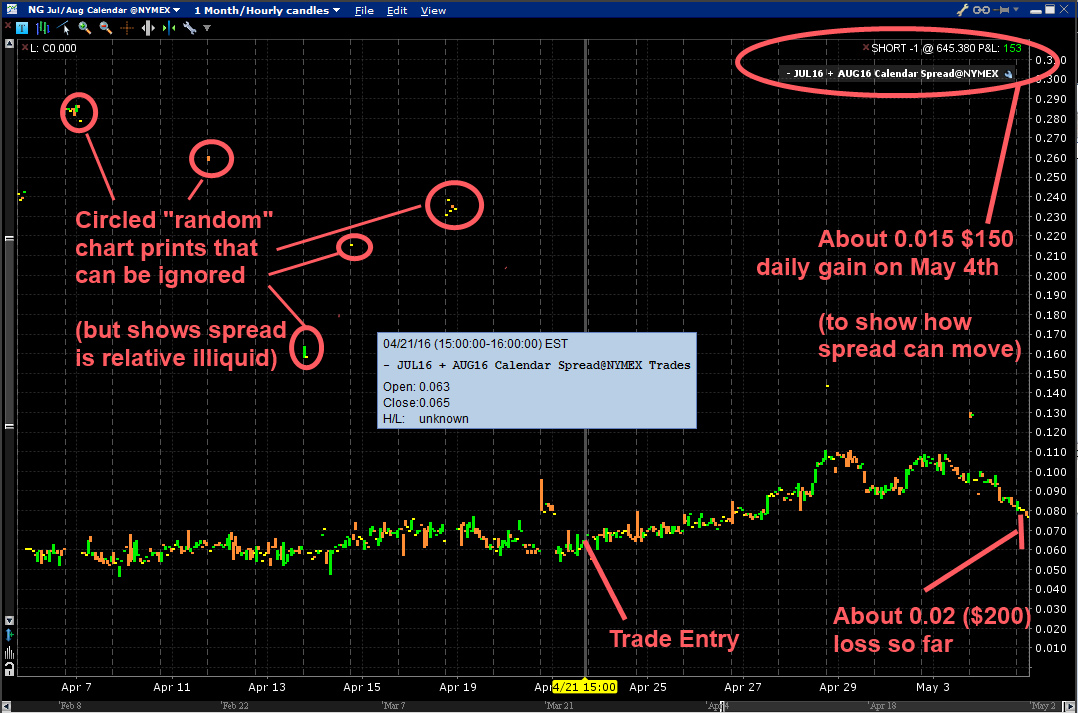 The aim is to be bullish natural gas, with the assumption that the nearer term month future will go up faster than the far month future. The near month future has about 45 days to go to expiration, so has time for the 30 days to pass, so it can be liquidated under the 30 day rule (as a spread).

The circled “random” chart prints on the chart image can be ignored, because presumably they are not real trades – however this does show that the spread is relative illiquid. This means that should always use limit orders for trade entry and trade exit, to avoid potentially large slippage. Even on 1 contract trade, this could be as much as $100 (0.01) either way throughout a trading day (check the chart) – so it can be significant to overall strategy profitability.

The spread can also move around between $100 and $200 (0.01 and 0.02) per day, but that is still within a manageable range on 1 future contract trade. The trade is a relative value mean reverting trade, so in theory it is not that likely to move massively in opposite direction for a long period of time – it will theoretically tend to move back into long term averages – so big spikes up or down tend to mean revert over time. The risk is that the “in theory” part is understated and the spread will lose more money than comfortable for a single portfolio position. In our portfolio this is managed by trading small enough (1 contract) to stay in the trade without worrying too much about temporary adverse moves over a few days.

The original position was entered as follows:

The unrealised gain loss on 4th May was:

Need to stay another 2.5 weeks in this trade because of 30 day rule, but then can re-evaluate. If some mean reversion has occurred and the Natural Gas /NG price has risen, the spread could come back to profitability. It is currently in an expected range, so no need to adjust yet.