The pound has been relatively flat for a month after the initial Brexit trauma, so we are considering a “Brexit exit” on our existing iron condor. Currently the iron condor is in the middle of it’s range, as the FXB is at $129 and the mid point of our iron condor is $130. Volatility has contracted from 30% on the brexit announcement to around 15% and trending lower towards the original pre brexit range of 8% to 10% implied volatility. 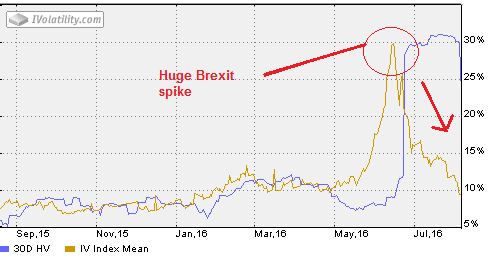 Given that our continued assumption is bearish on the pound, it makes sense to exit the iron condor before it sells off any further. Also the implied volatility contraction from a peak of 30% down to about 15% makes it more attractive to buy back the short option premium.

The $130/$135 short out spread was slightly ITM giving the trade a slightly bullish deltas, and since our assumption is still bearish we are ok to close out the entire trade for a profit. Given that FXB moved more than 15% after brexit, this is definitely a good result. We could leave on the short call spread $130/$135 to keep short position on the table. However we are trying to more disciplined with our trading approach of “on as a package” and “off as a package” for option strategies. Adjustments to strategies in mid trade are ok, but fundamentally it is cleaner to exit and entry all option legs together. This ATM spread that had been already adjusted on with a short call spread vertical $130/$135, was taken off for a loss of -$73. 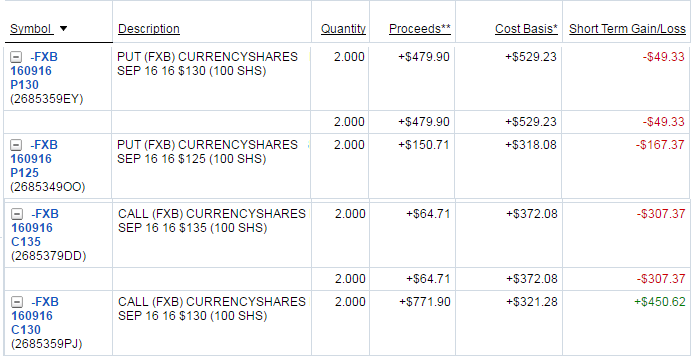 The call spread structure at $140 level is mostly worthless now. The generated a $216 profit and can be easily bought back for $50. It probably would be more logically to let the whole thing expire worthless because it’s way out of the money now, but in the interests of housekeeping we will exit now (on the same day the other side is exited). You could easily back an argument for doing nothing with this side of it, but we don’t have the patience to wait 40 days for it to expire to make only $50. All option legs of the entire OTM spread including the long call spread adjustment at $148/$149 was taken off for a gain of $216. 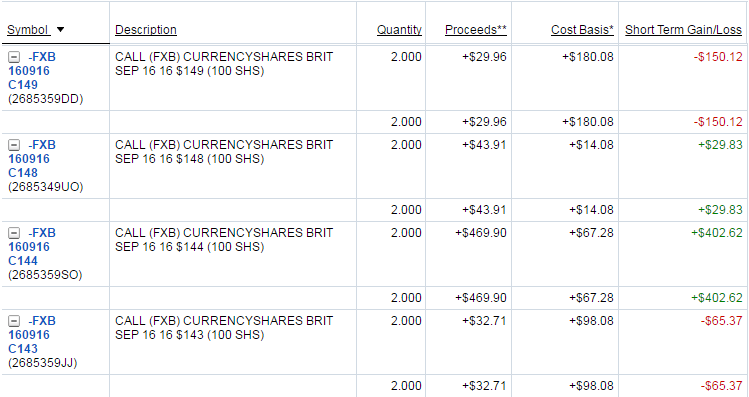 In summary entire trade was exited for a $144 ($216 – $72) total profit across all options legs, but only with $200 at risk after each trade adjustment was applied (so it was a very safe trade). Without a trade adjustment this would have been a $36 winner, however with the potential max risk of approx $600. So in this case the adjustments ultimately made more money due to selling premium and importantly lower the overall max risk on the trade. This shows how in a volatile trading environment adjusting spread by selling premium, can both reduce risk and manage trade profitability. This was only a small profit, but it does show how to manage an option trade successfully even with a 30 day rule.