This trade idea shows how to approach trading gold with long term diagonal spreads. The trade example shows how a bullish multi month GLD long call diagonal spread was entered and managed. This trade was IRA eligible so using multiple option legs does not generate lots of complex tax reporting, and there was no issue of paying extra capital gains if the trade is ultimately successful.

In March 2019 FED was signaling a rate pause which could be bullish for gold prices. This is an example of using options to express a “long gold” opinion in a portfolio, in this case using the physical Gold precious metal ETF (GLD)

In March 2019 Gold volatility was approximately 9%, which was in the lower quartile (lowest 25%) for the last six months – having had a range of approximately 12% in Dec 2018, down to 8.5% in Feb 2019. Low volatility generally makes a better trade entry for long term calendar diagonal spreads. Importantly saying that “the volatility is cheap” only means relative to its own recent history in the last few months for this particular ETF or commodity. This does not mean that the underlying will not move around, because trading gold is historical volatile. This only means that the debit on trade entry is cheaper, simply as you don’t pay as much option time premium for the longer dated call (because the market is currently pricing less of an expected move by Sept 2019).
The chart below shows the GLD volatility chart for several months before and after trade entry on 22nd March 2019. 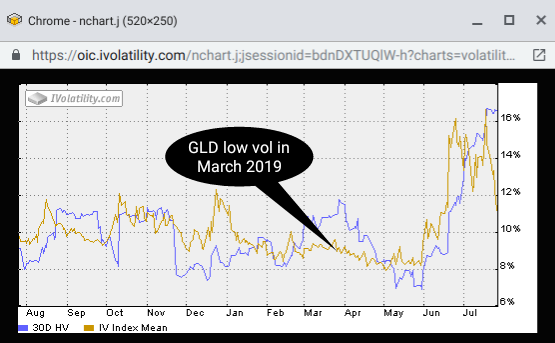 Having made a decision to long gold for 2019, the next step is to structure a suitable risk/reward trade within the 30 day rule. Here is the original trade entry when GLD closed at $123.97 on 22nd March 2019:

This trade was OTM so had approximately a 30% of being ITM at expiration - it was therefore a lower probability trade, but high conviction portfolio position ("long gold for next 6 months"). Losing the entire trade premium (defined at trade entry) was acceptable risk for the overall portfolio - but the payoff was potentially large for the relatively small initial risk, so it created the right risk profile to express the trade idea. Initially selling the shorter dated call help finance the longer dated call, and reduce the overall risk in the position. The intent is to avoid this shorter call being assigned and roll it multiple times over the summer to gradually chip away at the premium paid for the longer dated call.

Here are the main high level scenarios for the trade outcome - GLD stays in a range, goes up a lot or goes down a lot (just about covered all scenarios in finance there!):

If gold rallies strongly in the next month, it maybe difficult to roll the short call at a profit. This is a risk of the calendar spread strategy - the market call is "right" but gold rallies too fast, and the position makes little money. This happens because the negative delta of the short call becomes similar to the positive delta of the longer dated call - so the overall position can become delta neutral or even negative delta (short underlying) in a strong rally. On average though the short call can be managed with month to month adjustments.

Trade Adjustment in May 2019

The trade adjustment that was chosen in the end, was to let short call expire worthless and simply hold the longer dated Sept 2019 call option. This has keeps the trade risk to approximately $1150 but there is still now no upside cap and still plenty of time for the trade thesis to play out. The trade is now $464 better off than if we had just bought the long dated call for $1622. Sometimes doing nothing can be the best option.

As of 29th July, the Sept 2019 Option premiums are indicating that the market is pricing in significantly more upside than downside for gold in the next 7 weeks. Looking at the option chain below shows the distance of both 30 delta OTM put and call options from the underlying GLD price. 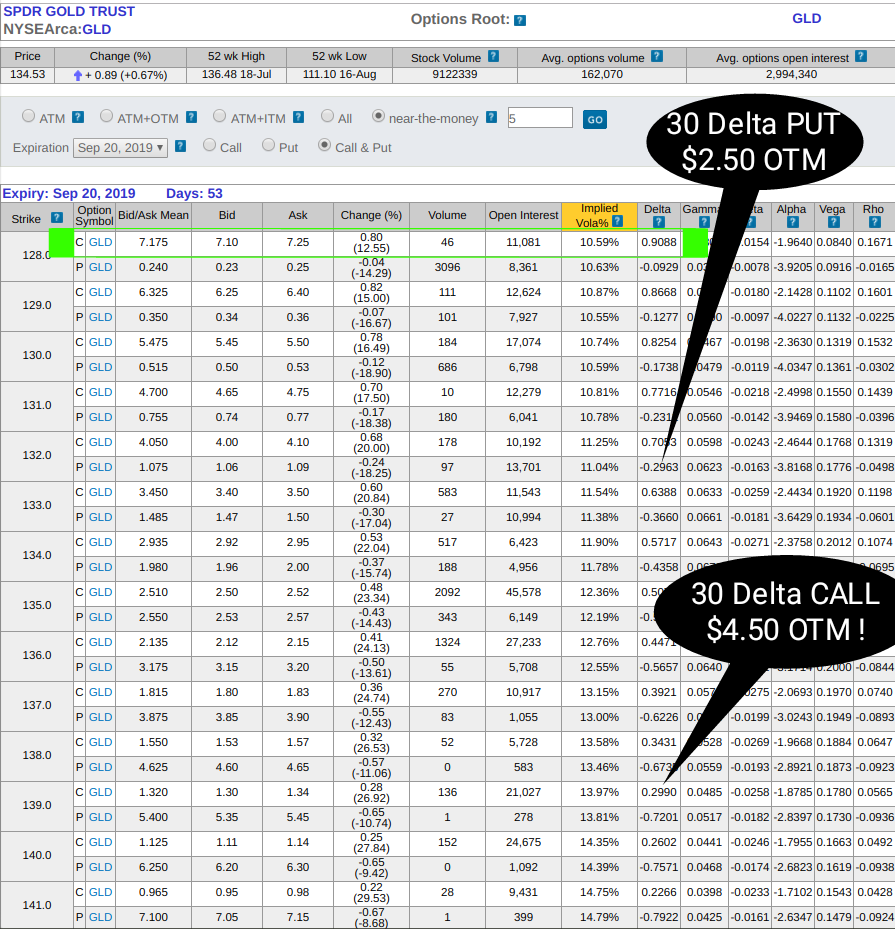 GLD is traded at $134.53 as of the NY close on 29th July 2019. Going 53 days to expiration on the Sept 2019 option chain, shows that the $139 call (with a delta of 0.2998) has approximately the same delta of the $132 put (with a delta of 0.2963). This means that market is assigning the 30% probability that GLD is $4.50 higher by Sept 20th 2019 expiration and a 30% probability that is $2.50 lower. That appears to be a huge bullish skew indicating that the market is still expecting higher prices in the medium term - despite the recent rally. If that bullish skew starts to disappear in the next few days, then would consider closing the long position, but for now content to hold until closer to expiration - especially because the option position only has a relatively small amount of remaining extrinsic value (time premium).

Importantly this now means that the option delta is over 90%, so the position is trading like a stock position in the underlying. Since 6 calls $128 Sept 2019 are held, that representing a 6 x 100 x option delta = 600 shares x 0.9088 position = approximately equivalent to a 545 GLD share position. That represents a notional position of approximately 545 share equivalent x $134.53 = $73,318. There are some slippage in option bid/ask spreads and the option will move as GLD moves around - but that does give a good approximation of the current position size.

This is the current GLD price as of 29th July 2019, and the position has made nice progress after the trade entry on 22nd March 2019: 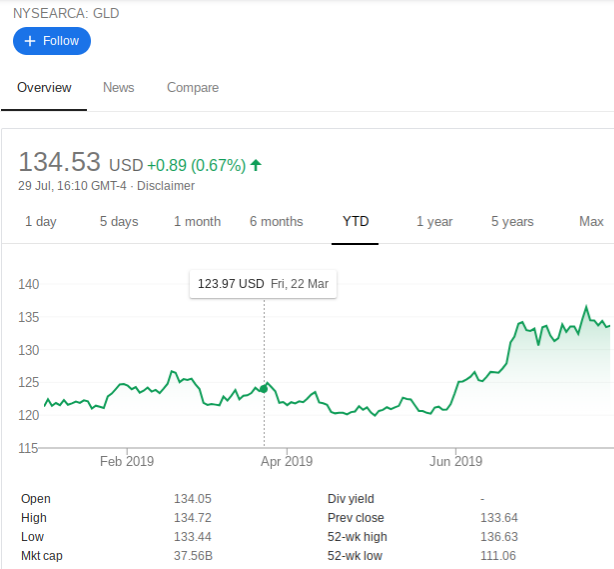 The current unrealised gain loss on the Sept 2019 call position $2727, added to the $454 from May 2019 expired call, gives a total gain for the overall position of approximately $3181. This is approximately a 276% return on capital so far.

These are some possible exit strategies as the option call is getting closer to Sept 20th 2019 expiration date:

Exit long dated call at a profit - simplest technique, but does not maintain any portfolio gold exposure which will likely be a good idea in a rate lowering environment. This can be done by either just simply selling the call, or by selling dated Sept 2018 ATM calls and hoping to deliberately get called away.

Roll long dated call up and out to a higher strike - this will depend if volatility is still high (over 10%) then this would be an expensive trade. Specifically because if the long option is significantly ITM and getting closer to expiration date (Sept 2019) - it will not have a lot of time premium left in it. Rolling the call up to several months out further out will likely incur some higher than desired premium (due to the high volatility environment). However rolling out could remove all risk from the position (if done for a $1150 credit) and would maintain a multi month GLD position into 2020.

In summary on 29th July the call option position represents an equivalent $73,318 long GLD position, that was acquired with about $1150 of risk. With this strategy there was initially a 30% chance of GLD finishing in the money above $128 by expiration (based on the option delta). The probability of a touch is defined as double the initial option delta - so that also means that over the trade lifecycle there is a approximately a 60% probability of GLD touching $128. To word that in a different way it means that at some point between Mar and Sept 2019 in all likelihood there will be about a 60% possibility of taking at least some profit from the trade. Additionally because we thought GLD would go up in 2019, then we also are thinking that the stated probability was under priced. That meant that using our bullish opinion on trading gold from the macro fundamentals has given us the opportunity to put the odds on our side.

Importantly this wasn't just like a lottery ticket style infomercial that says "I make 500% a week buying options" - where the stated returns are often from buying lottery ticket way OTM options that only make that "big" money occasionally, but on average is a losing option strategy. In summary the GLD strategy had:

This trade shows the power of option leverage, and why it is always a good idea to structure your portfolio to respect it - even if we just happen to be on the right side of it this time. This trade is still ongoing so no decision has been made yet, however it shows how to get to good risk adjusted returns using a relatively small amount of capital.